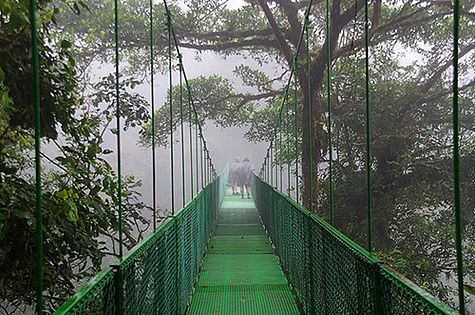 Costa Rica is a very privileged country in the heart of the American continent. It has served as a bridge from long ago, as cultural as biological, between North America and South America, its tropical weather is influenced by its two great natural limits, to the west, the Pacific Ocean and in the east, the Atlantic Sea, responsible of producing a great amount of rain during most of the year.

Costa Rica limits to the north with Nicaragua and in the south with Panama, where it shares a lot of cultural similarities as well as with the rest of Central America, but also have very different politics from the rest of Central America. Since 1948, Costa Rica was the first country in the world to abolish the army and since then, the inversion of the Estate on the society has accomplish to put the country among the first world countries with the highest rates of development. Literacy of the 98% of the population, the life expectancy when born is of 78.6 years, an electric coverage of the 97.5% of the territory, and the oldest democracy of Latin America are just some of the accomplishes that made Costa Rica an outstanding country.

Its geography is so varied as its nature, it posses the 5% of the global biodiversity. It has more marine surface than land, its territorial waters extends over the 500000km2, including the Isla del Coco, located 480km southwest from the Peninsula de Osa, in the Pacific coast. This island was declared Natural Patrimony for the mankind by the UNESCO in 1997.

Costa Rica is a tropical paradise that combines a great number of different ecosystems that includes primary forests, secondary forests, cloudy forests, dry tropical forests, moors, swamps, wetlands and many others. Its forest posses precious woods like mahogany and cedar and many other species that nowadays don’t exist in other territories.

The territory of Costa Rica gathers a great amount of life, but its most precious treasure is its people. Very gentle and pacific people always willing to share their country with an honest smile and make the visitors take a little piece of Costa Rica in their hearts. That makes the ticos be “PURA VIDA”!