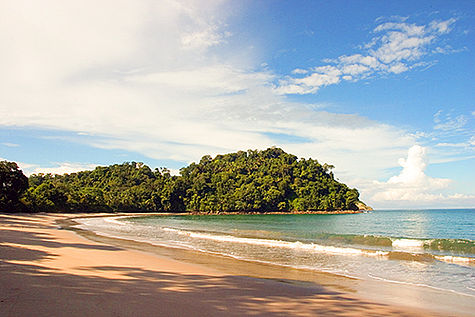 The land surface is of 51000km2, and in this small space, we find paradisiacal white sanded beaches as the ones in Cahuita that mix up with the exuberant tropical rainforests that are distribute all over the country. In the high grounds we can find magical cloudy forests and in the low lands great wetlands, like for example Caño Negro, that serves as a natural shelter for a great number of migratory birds. Very strong and outrageous rivers like the Rio Pacuare or Grande de Terraba finds the way to cross peacefully valleys and fertile plains, in their way to the sea. And a very impressive volcanoes collection, some of them active as the Poas Volcano, are located in a straight line forming a volcanic chain, divided in four ranges that split the country in two sides, each one of them with a very particular weather.

Because it is such a small but diverse country, the visitor can find in Costa Rica great contrasts in short distances, you can visit the cloudy forest in the Monteverde reserve by the morning, the amazing Volcan Arenal by the afternoon and finally end the day watching a beautiful sunset in any of the beaches in Golfo de Papagayo.

Costa Rica is a very small country that receives direct influence from both, the Caribbean Sea and from the Pacific Ocean. It has a tropical weather and divides in two seasons: the rainy station that goes from March to November and the dry station that goes from December up to April. The months of April and December are the ones of transition so that’s why the seasons can vary in a few weeks. The average temperature goes from the 21°C to the 27°C, the minimum temperatures in the dawn of January on high mountains as the one of the Cerro Chirripo and the Volcan Irazu that has a height over the 3400mts from the sea level, can become under the 0°C, different from some maximum temperatures registered on Guanacaste in April, that can increase the 35°C, these are exceptional examples and generally the temperatures in Costa Rica are enjoyable. Towards the east from San Jose the average temperature is of 22°C, being the best climate of the country. In the mountain areas, the average is of 13°C and near the ocean has an average of 26°C.

Generally in the morning the sky looks clean and in the afternoon appears some rains or storms. The sunshine stays out an average of twelve hours per day; it starts more or less at 5:00 am and hides at 6:00 pm. Exceptional for the months of December, January and February which stays out like ten and a half hours per day. The sun rays have more influence on the months of March, April and May, that’s why, is always considered to have a solar blocker.

The relative humidity can reach the 100% on the rainiest months: May, June, August, September and October. Also this humidity can be affected by the low pressure systems, mostly on the Caribbean.

Another aspect that affects the weather of Costa Rica is the El Niño phenomenon, which provokes a warming on the water of the Pacific Ocean, raising the precipitations and in the other hand; the La Niña phenomenon cools the waters of the Pacific.