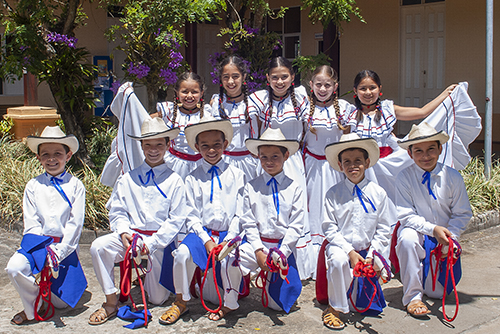 Language: Spanish, besides a great amount of the Costa Rican’s speak English, also is spoken in an inferior way French, Italian and Germany as the secondary language.

Population: most of the people live on the Central Valley. The population is product of the mix among Europeans, mainly of Spanish with natives. We can find natives, Afro-Americans, Chinese, and political and economical refugees from Colombia and a great amount of Nicaragua immigrants that represent the 12% of the population. They are also important groups originally from Argentina, Chile, Spain, Korea, Netherlands, United States, Japan, Switzerland, Italy and Germany.

Education: the basic and general education is free and obligatory for all Costa Rican citizens; the primary education coverage is of a 100% and from the high school is of a 70%. The literacy teaching covers a 96%. The Public Ministry of Education has public primaries and high schools distributed all over the country and have four public universities; Universidad de Costa Rica, Universidad Nacional, Instituto Tecnologico de Costa Rica and the Universidad Estatal a Distancia. Besides this, the Instituto Nacional de Aprendizaje teaches all the workers for special development in technical areas. Recently, it was inaugurated the fifth public university, the Universidad Tecnica Nacional.

Health: Costa Rica has the third best healthy system from Latin America and has the highest life expectancy from all Latin America with 78.6 years, same as Canada and the United States. It has a large network of public hospitals, clinics and minor healthy centers that are in charge of medical assistance in all the national territory.