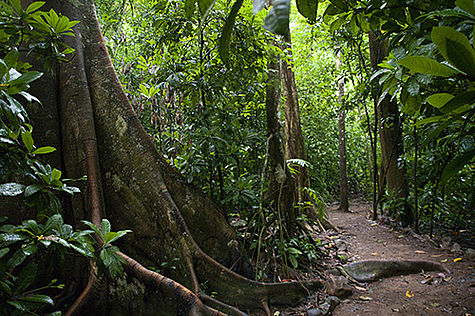 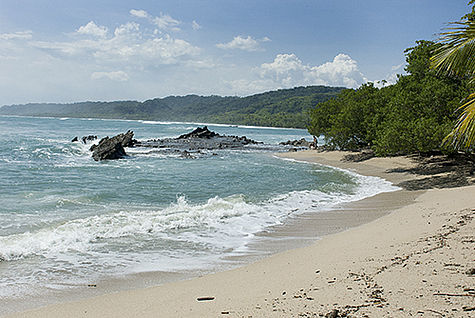 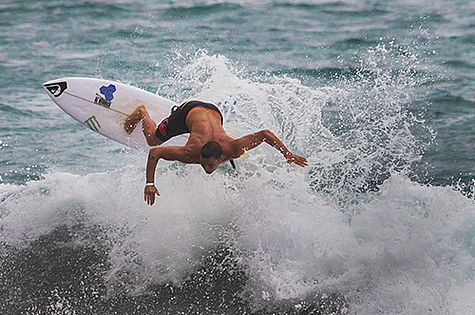 This zone stretches from the port of Puntarenas to the southern tip of Manuel Antonio National Park, including the main islands of the Gulf of Nicoya such as Chira Island and  the tip of the Nicoya Peninsula.

It has an irregular coastline with long beaches rich in vegetation. In addition, the proximity of some of its beaches to the capital city San José has guaranteed a tourist and commercial development. In all this coastline there is a natural jewel that stands out from the rest.

It is the Manuel Antonio National Park, undoubtedly one of the most visited wildlife reserves on the planet and it is not by chance. Manuel Antonio is home to a vast number of natural wonders with an enormous biodiversity of flora and fauna, along with its white sand beaches hidden among steep hills abundant in dense vegetation, make this sanctuary the main attraction not only in the Quepos area, but throughout the Central Pacific.

The city of Puntarenas is the capital of the province of the same name, the largest in Costa Rica. This city is a thin strip of land that accompanies the sea and extends around 3 km into the gulf. This route, called the passage of La Angostura, has a width equivalent to the thickness of a two-way street, a railway line and the beach.

It was after the inauguration of the electric train to Puntarenas on April 8, 1930, that thousands of Costa Ricans were able to visit it. Many remember with fondness and nostalgia this first trip to the "port", as it is popularly known.

Among its attractions is the famous Paseo de los Turistas in front of the Muelle Grande, the most visited place in the city, whose origins date back to the 1930s.  This is a place not to be missed and where you can enjoy a fruit salad, a glass of ice cream or a ''churchill''.

The extensive beach of Puntarenas, parallel to the promenade, has gentle waves, gray sand and meagre vegetation. Awarded with the Ecological Blue Flag , which certifies the high environmental and safety standards it complies with.

Along the entire coastline are the most visited beaches in the country and with great tourist development.  Some are accessible by car due to their proximity to the capital, while for those located at the end of the peninsula it is necessary to take a ferryboat from the Puntarenas Estuary, crossing the gulf to Paquera (on the east side of the peninsula).

Here begins a long list of beaches, from Punta Murciélago and towards the town of Cóbano are the beaches of Pochote, Cocalito and Cocal. There is also Montezuma Beach, which borders the Cabo Blanco Absolute Natural Reserve and ends at Punta Cabuya.  This charming beach has impressive waterfalls, which fall into the sea from large cliffs covered with vegetation.

Tambor Beach, is a beautiful beach with light-colored sands surrounded on one end by Punta Tambor and on the other by Punta Amarilla .

From Cabo Blanco to the northwest and up to Playa Coyote, the beaches of Santa Teresa and Malpaís are easily accessible and are renowned for being ideal spots for surfing. Playa Manzanillo, whose difficult access has kept its splendor intact, and Caletas are located here.

To the southeast of the port of Puntarenas, are the best known beaches in the country such as Playa Jacó, internationally renowned for its tourism development and surfing tournaments; Playa Hermosa and Esterillos , which have great natural beauty and are also visited by surfers due to their strong swell.

The beaches of Tárcoles, Herradura and Manuel Antonio are also close to the capital allowing them a high tourist development and visitation. Playa Herradura, Jacó and Hermosa also offer a wide variety of hotels as well as a cable car that crosses the forest and from where you can view a great waterfall.

Manuel Antonio Beach is crescent shaped with white sands, adjacent to the well-known Manuel Antonio National Park. Its 1625 hectares of land and more than 55,000 marine hectares protect primary forests with guapinol negro trees, an endangered species, and secondary forests that used to be livestock pastures.

The Central Pacific also encompasses protected areas of great importance such as the Carara National Park located in an area of climatic transition, thus featuring more than 1400 species of plants. Here you can observe a meandering lagoon covered by water hyacinths inhabited by turtles, crocodiles and some 400 species of birds.

At the southern end of the Gulf of Nicoya is the Cabo Blanco Absolute Natural Reserve, Costa Rica's first protected area. It preserves the seabirds that visit it as well as the primary forest of the region. Archeological sites of Chorotega tribes were discovered near the El Sueco trail.

Finally but just as important, the famous Cocos Island is located in this Central Pacific area about 540 km from Puntarenas. Declared a UNESCO World Heritage Site in 1997.

Among its attractions are exuberant vegetation, abrupt topography along with high rainfall and numerous waterfalls that fall directly into the sea. World renown by the richness of marine fauna being a concentration point for thousands of hammerhead sharks as well as a staging area for a variety of other species.

There are other islands closer to the Gulf of Nicoya where the most visited are Isla Tortuga with white sand and lots of vegetation but no places to stay. It is located in front of the Curú National Wildlife Refuge.

San Lucas Island was famous for its prison that was closed in 1991. Today it is famous for being a wildlife refuge that can be visited by boat. It has historical background having served as a cemetery for the Chorotega indigenous population who inhabited the Nicoya Peninsula.

Chira Island, with an area of more than 3,000 hectares, is the largest island in Costa Rica. It is inhabited, unlike the other islands, by over 2,000 people who are mainly engaged in artisanal fishing. It has a mangrove area with dense vegetation and seabird species and offers lodging.

From its wide and beautiful beaches to its lush forests, the Central Pacific region is a box full of surprises ready to be discovered and enjoyed to the fullest extent in this part of Costa Rica.