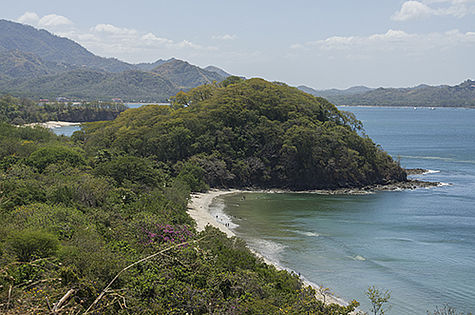 This is one of the flattest terrains in Costa Rica which has savannah plains, a dry tropical forest and scenic beaches contrasted by impressive volcanoes.

Splendid sunsets tinged with green in the winter and gold in the summer, when most of the vegetation has dried up in the harsh sun. It is also a point of cultural and historical relevance for Ticos.

Costa Rican culture in this area has been intrinsically influenced by livestock ranching and hacienda work, evident in the people of Santa Cruz, Liberia and Cañas who ride horses and celebrate popular festivals with bulls and typical dances often to the sound of marimba music, very much representative of Guanacaste.

Here you will find a wide territory of beaches that goes from Punta Coyote to Pochotes Beach in Salinas Bay (border with Nicaragua), an extension of more than 200 kilometers of beautiful beaches of Guanacaste. Preferred by surfers around the world and by leatherback sea turtles.

In the far north of Costa Rica is the Salinas Bay with the Pochote and Puerto Soley beaches abundant in vegetation and strong waves. In front of this coast it is possible to see Bolaños Island.

Continuing along the coast is the Santa Elena Peninsula, one of the oldest geological areas of Costa Rica and part of the Santa Rosa National Park. Here lie Playa Blanca, with its horseshoe shape and Potrero Grande beach, whose waves are very attractive for surfers, however, it has no access by land, only by boat.

In this protected area we find Playa Nancite, where there is an impressive natural spectacle, more than 175 thousand sea turtles of four different species that come to nest; and Playa Naranjo, with the famous Roca Bruja, one of the best wave breaking points in Costa Rica, during the months of December to March. Sea turtles also nest here.

Continuing south, is the Gulf of Papagayo, a point of luxury tourist development, with important hotel chains. The beaches of Nacascolo and Playa Panama are the main ones, the latter being the best known and most visited. Then come the neighboring beaches of Coco, Ocotal and Hermosa, the most popular in the country.

In the western sector of the Nicoya Peninsula, there has been an impressive tourist development in the following beaches: Flamingo , which has a marina; Conchal, with its coastline gilded with seashells; Tamarindo, ideal for surfing and with a very active nightlife; and finally Langosta, where the Leatherback and Olive Ridley Turtles nest.

Further south on the peninsula are the beaches of Ostional, which is part of the Ostional Wildlife Refuge, nesting ground for Olive Ridley turtles from September to November; Nosara, Guiones and Sámara, all with strong surf and lush vegetation, except for Playa Sámara. Further on Playa Bejuco, Playa Coyote and Playa Caletas, have difficult access but with great scenic beauty.

Guanacaste is also home to the Santa Rosa National Park, which protects 38,674 hectares of land and 78,000 marine hectares of great biodiversity and is home to the famous and historic Casona de la Hacienda Santa Rosa, where a battle of great relevance to the Costa Rican and Central American people took place. On March 20, 1856, filibusters (soldiers directed by the U.S. government under the command of William Walker) who came to enslave Central America were defeated and expelled.

To the northeast is the Guanacaste Volcanic Mountain Range where the inactive Orosi Volcano (1,487 m.a.s.l.) is part of the Guanacaste National Park. This protected area, together with Santa Rosa National Park, includes the most important dry tropical forest reserve in all of Central America.

Rincón de la Vieja Volcano, an active and frequently visited volcano, where it is possible to see hot springs, volcanic mud pots, changing vegetation and more than 300 species of birds. It is part of the Rincon de la Vieja National Park, a shelter for more than 32 rivers, with watersheds that supply the Tempisque River and form impressive waterfalls.  To the south is the Miravalles and the Tenorio Volcanoes, inactive for centuries.

In this area, the cities of Santa Cruz, Nicoya and Liberia are strategic points from which to access a wide variety of attractions, as well as to appreciate the cultural mix that has taken place over the years.

In the North Pacific there are a large number of protected areas, all of them easily accessible. Some of these are: Bolaños Island National Wildlife Refuge, Santa Rosa National Park, Guanacaste National Park, Rincon de la Vieja National Park,