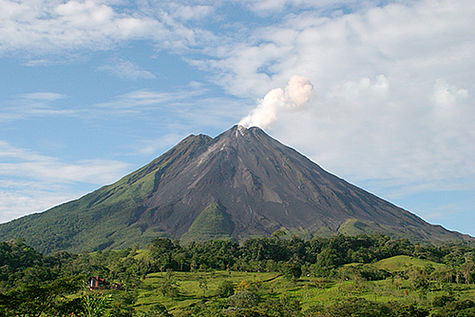 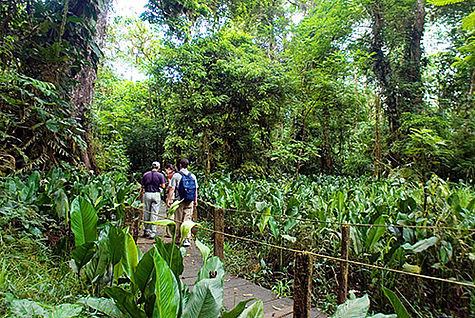 A territory composed mainly of plains with some active volcanic hotspots and important rivers, which attract the attention of national and international tourists. Indigenous culture, extreme sports and the conservation of flora and fauna are intermingled in this area. A destination for all tastes.

This area includes Fortuna de San Carlos where the Arenal Volcano  is located (1633 m.a.s.l.), a volcanic cone that has served for the study of scientists due to its continuous activity (without being dangerous). It is a natural attraction to enjoy lava emissions contrasted with the darkness of the night. Prior to the eruptions it was known as Cerro Arenal. On July 29, 1968 it awoke with a violent eruption and since then it has been in constant activity.

It is part of the Arenal Volcano National Park and together with the Cerro Chato Volcano and the margins of Lake Arenal (south of the volcano) conserve rich wildlife, more than 50% of the country's bird species and three of the most endangered species of mammals: the tapir, the jaguar and the giant anteater.

On the slopes of the Arenal Volcano it is possible to bathe in the delightful and even therapeutic hot springs of the Tabacón River. A series of mineral water-filled pools, at a temperature of 37°C and surrounded by lush vegetation.

Next to it is Lake Arenal (88 square kilometers), artificially created in the 1960's for hydroelectric power generation. Not only is it possible to tour it enjoy its scenic beauty, but you can also practice sports such as windsurfing, sailing and fishing.

La Fortuna offers a variety of tourist attractions such as zip lining tours, hanging bridges and a cable car from where you can enjoy a panoramic view of Lake Arenal and the west face of the volcano as well as the density of the forest. Here is also the Fortuna Waterfall, with 70 meters of impressive natural beauty, bordered by a trail that shows all its splendor.

To the south of La Fortuna, in the Cordillera de Tilarán, we find the Monteverde Cloud Forest Biological Reserve (5000 hectares) of great importance for the protection of the cloud forest and its more than 3000 plant species, with more than 500 orchid species, making it the place with the highest density of orchids per square kilometer in the world.

In addition, there are about 120 species of amphibians and reptiles, more than 400 species of birds such as the Quetzal and the bellbird, and 100 species of mammals.

This place was originally inhabited by farmers from Miramar, San Ramón and Esparza, but it was after the arrival of American Quakers in the 1950s that the reserve was founded.

In the town of Santa Elena, before the reserve, there are several privately owned services and attractions such as the Selvatura park with hanging bridges, a zip line and a butterfly farm that houses one of the largest private collections of insects in the world.

You can also visit the largest private reserve in Costa Rica, the Children's Eternal Rainforest, 22,000 hectares of rainforest that can be visited by trails. From here you have a magnificent view of the Arenal Volcano.

The Tenorio Volcano is located a short distance from Arenal and in its foothills it is possible to enjoy the magnificent and popular Celeste River, which takes its turquoise color in the sector of Los Teñideros where the transparent waters from two different sources come together and are dyed due to the minerals they carry, a chemical reaction of unique beauty.

The town of Tilarán has a great commercial development thanks to wind energy. It is possible to visit the spectacular wind turbines several meters high. From here you can plan tours to other areas such as Monteverde and Rio Celeste.

At the western end of the Northern Zone, in the Guatuso Plains, is the Caño Negro wetland and Caño Negro Lake (800 hectares), which is composed of a seasonal lake and marshes, its three meters deep are home to the Gar fish, a living fossil from the dinosaur era. This region serves as a refuge for endangered species of flora and fauna, as well as an oasis during the summer sun. It is possible to appreciate its beauty by traveling through the wetland by boat.

Near Caño Negro is the Maleku Indigenous Reserve, whose indigenous inhabitants live in the Palenques del Sol, Margarita and Tonjibe. They maintain their traditions through dances, food, handicrafts(hammocks and bags) and the use of traditional hunting tools. It is possible to visit this reserve and learn about its culture, an unforgettable experience worth living.

Other attractions of impressive beauty are the famous and impressive Venado Caves, discovered in 1963. They exist due to the erosion and friction of underground rivers that created labyrinths, passages and spaces up to 8 meters high and 10 meters wide. It is a unique limestone formation more than 2 million years old.

To the east of the northern part of Costa Rica is the Sarapiquí region, with high humidity and dense evergreen vegetation. Here is the La Selva Biological Station, founded in 1954 for the study of tropical forests. It belongs to the OTS (Organization for Tropical Studies) and is one of the oldest reserves in the country.

The Sarapiquí River is undoubtedly the main attraction of this region and its meandering course that accompanies farms and dense jungle make its journey a unique experience. Its different degrees of difficulty make it ideal for rafting. Adrenaline mixed with nature.

Another town in the area is Los Chiles, a city located along the Río Frío, a few kilometers from the Nicaraguan border. Home to a system of river channels that can be traveled by boat. Tours to Caño Negro can be organized from here.

In addition, there is Ciudad Quesada, the head of the canton of San Carlos and administrative center of the Northern Zone. Visit one of its attractions is the Central Market, where you can enjoy succulent breakfasts.